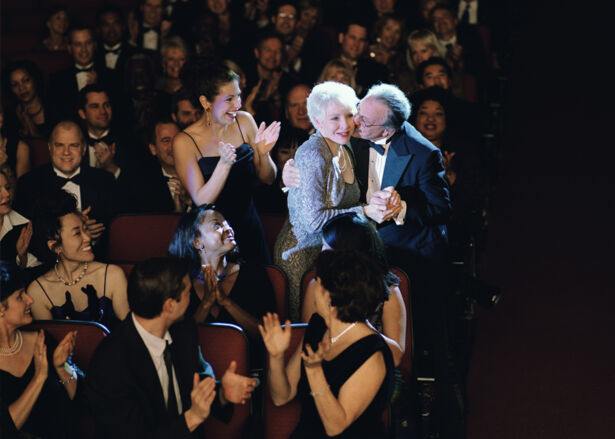 Do you remember the last movie that had a lasting impact on you? Over the years, many studies have shown that movies can change people’s perceptions of others in society. In fact, one study found that younger audiences understood the emotional complexities associated with aging better after watching movies about seniors and emotive topics.

Movies form a huge portion of our entertainment, in fact, in 2019 (when theaters were last at normal levels) over 1,239,000,000 tickets were sold in the U.S and Canada. That huge number doesn’t account for at-home viewing too.

We’re definitely watching a lot of movies, but how are seniors represented, young and old audiences seeing on the big screen? We dug into the data to find out.

Overall, seniors are rarely the lead actor in Hollywood movies. Our analysis shows that since 2000, this figure ranges between 2-6% of movies made, with 2021 seeing just 2% of its top movies with senior lead characters and actors.

While seniors may not often be the main character in a movie, they are more present in the main cast in 2021 than ever before.

On the whole, our data shows that since 2000, Hollywood movies are including more seniors in their top line-up, but this appears to be coming at the cost of seniors being in smaller supporting roles. 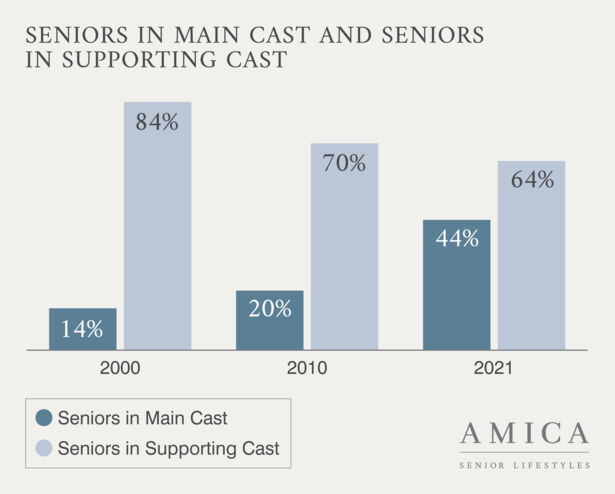 This data does not mean that there are lots of senior characters in Hollywood, however, as many movies contain only one senior actor in their cast, both main and supporting. In fact, one 2018 study found that only 10.7% of all characters in movies from 2016 were aged 60+.

Despite this trend of inclusion in main character roles, over 1 in 6 (16%) of the top movies of 2021 didn’t have any actors aged 60+ in the main cast or supporting roles.

As part of our analysis, we looked at what type of characters seniors were playing in the top movies since 2000. This could be something as simple as whether they were the hero or villain in the movie or if they worked in the military for example.

Our study found that seniors are more often than not shown as parental figures, both parents, and grandparents. Second to this role, seniors typically play authority figures like politicians or monarchs, followed by military personnel. When they were playing someone in the military, it was often a higher ranking official too. 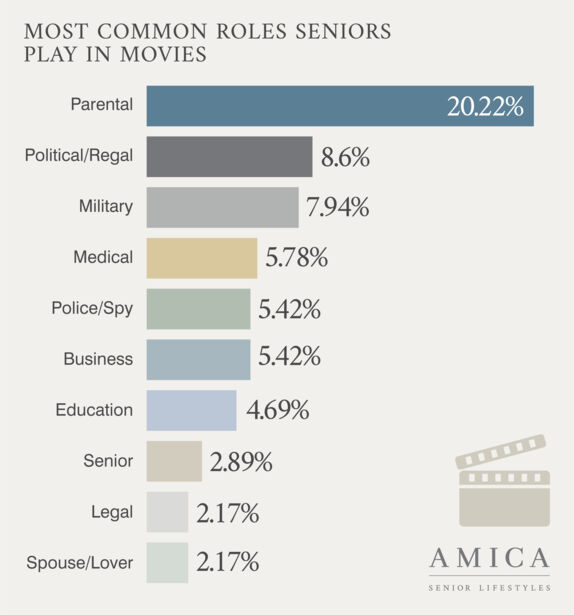 Are seniors heroes or villains in the movies?

In addition to the kinds of jobs and roles seniors play in the top movies, we wanted to know are they playing ‘good’ or ‘bad’ characters? 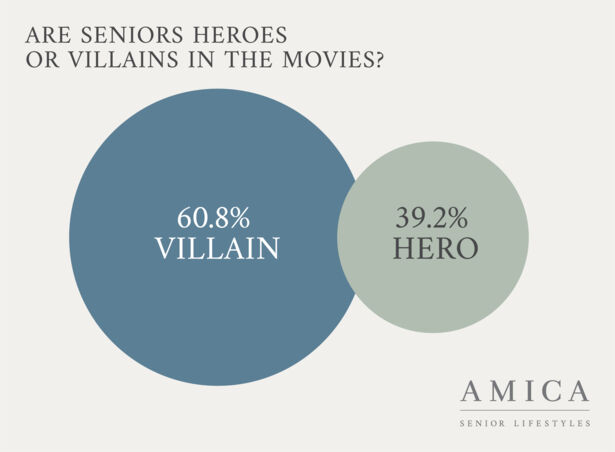 Demographics of seniors in highest-grossing movies

As well as analyzing the roles and types of characters seniors play in movies, we looked at what share of gender and race was being portrayed in the highest-grossing movies over time.

Generally, far more senior men are acting than women consistently over time, however, there is a slower trend of senior women landing more roles. This analysis includes both main cast and supporting cast roles. 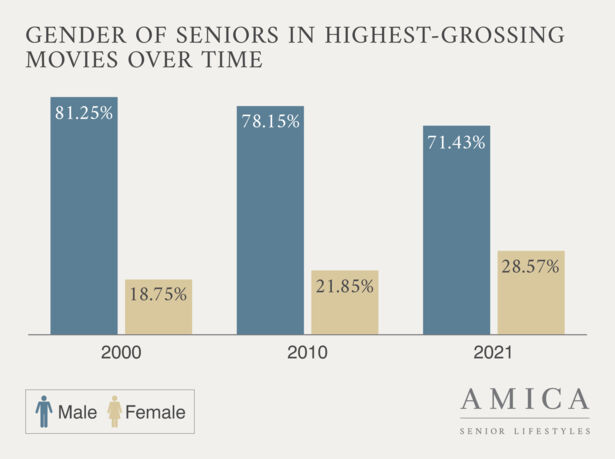 Interestingly, our study found that male actors over 60 are more likely to play 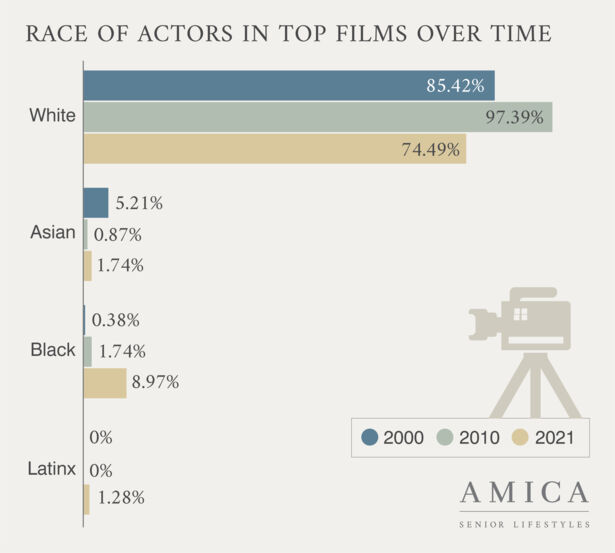 As part of our analysis into seniors in Hollywood we also looked at the careers of 25 of the most successful senior actors in modern-day movies. We wanted to see how the kind of roles change over time, how they are received by audiences through the years, and who works the hardest. 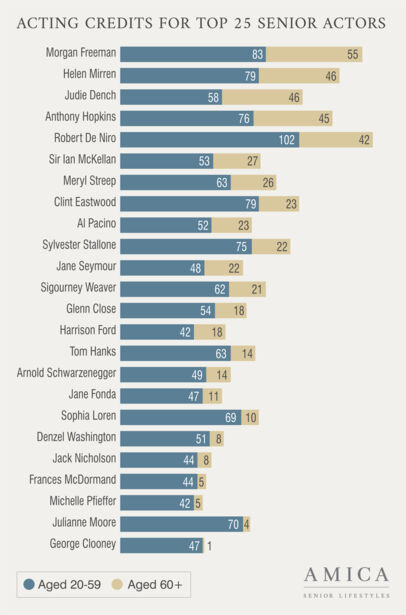 Morgan Freeman has the most acting credits past the age of 60, totalling 55, followed by Helen Mirren and Judie Dench with 46 each. Robert De Niro is the only actor on this list to have over 100 credits to his name, with 42 of those being after the age of 60.

To analyze average movie ratings, we looked at IMDB ratings for the entirety of an actor’s career then segmented the scores based on age: 20-59, and 60+. On average, the top senior actors largely have the same audience rating before their senior years as they do currently, there is a difference of -0.15 in scores over time.

Of the 25 senior actors we analyzed in our study, 11 of them had IMDB scores that improved with their age. At the top of the table, Frances McDormand leads the charge with her average audience ratings increasing by almost 1 point after she was 60.

Additionally, McDormand has the highest total average IMDB ratings across her acting career with an average score of 6.89, closely followed by Denzel Washington and Tom Hanks, who both had average scores of 6.85. 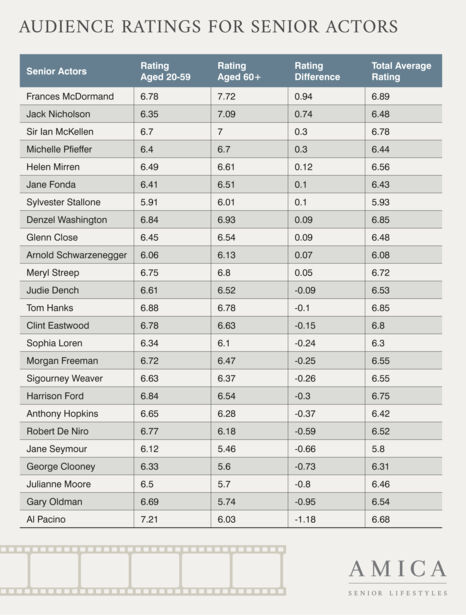 From our deep-dive analysis of the top senior actors, we found some trends in the type of roles that they portray.

Male actors typically play military personnel or criminals before the age of 60, and as they grow older they continue to play these military roles, but with far less focus on criminal characters.

Female senior actors almost always play spouses or love interests as their most common role before the age of 60, but after this point, their roles develop into parental roles, monarchs, or older love interests.

In short: male actors play fewer criminal characters as they age, and female actors play more monarchs and parental figures. This is taken from our sample of the top actors aged 60+ and will likely differ highly for supporting actors where roles such as Kings and Queens would be less likely to be background characters.

Despite hitting their 60s, age didn’t stop any of these stars in our analysis from making new movies. Some of the highest-rated movies in this analysis, using IMDB score, included some of these actors aged 60+, such as:

With all this talk of seniors in the movies, we thought you might like to know some recommendations. The following are some movies that have great stories about seniors, or those that contain stellar acting performances from seniors.

We reviewed the top 50 movies of 2021, 2010, and 2000 ranked by domestic box office figures as stated by IMDB’s Box Office Mojo. We counted the number of senior actors (aged 60+ upon movie’s release) in the main and supporting cast and analyzed what kind of characters they played in these movies. Movies in the analysis were chosen in December 2021.

Some senior actors, especially those who played smaller roles, have had their age removed from their online IMDB (and others) profiles, therefore were not able to be verified as 60+ and discounted from this study.

Separately, we reviewed a list of 25 top senior actors, as analyzed by 24/7 Wall St., IMDB, and Google search interest, to review workload over time, movie ratings, and how roles change over an actor’s career. Their average IMDB scores are calculated by averaging movie scores from all supporting and main role acting credits on IMDB.

Movie recommendations came from a range of sources including IMDB, Ranker, and Chicago Methodist Senior Services.