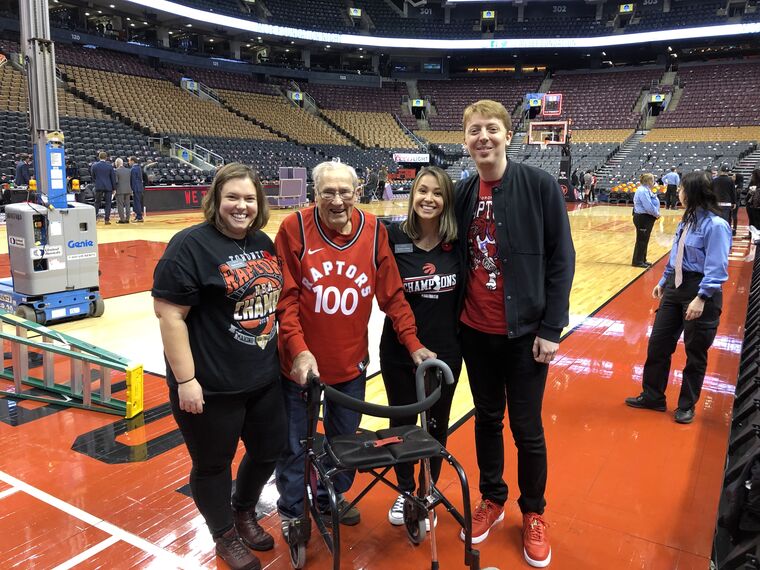 It’s not every day that you get to celebrate a 100th birthday, so we made it extra-special — and filled with new experiences and milestones — for an Amica Whitby resident named Paul. We took this basketball fan to his first live Toronto Raptors game, an extraordinary evening made possible by teamwork at the Whitby senior lifestyles residence known for personalizing experiences for its residents.

Thanks to Amica’s unique discovery process — where every team member gets to know about residents’ lives, goals and favourite things — the team at Amica Whitby knew about Paul’s love of basketball. Planning a night on the town to celebrate his 100th birthday, Life Enrichment Coordinator Stephanie Silk reached out to another basketball fan: Kashtin Fitzsimons, Amica’s Manager of Quality Improvement. Would Fitzsimons be willing to share his Raptors seats with Paul so he could see the NBA champions in person for the first time?

When Fitzsimons heartily agreed, Silk contacted the Raptors organization to level up the festivities. She explained that Paul would be marking his milestone birthday by attending his first game, and shared where she would be sitting with Paul, Kashtin and fellow Life Enrichment Coordinator Kristen Acoba. She hoped the Raptors could help make Paul’s birthday even more memorable.

Meanwhile, knowing Paul’s favourite food was spaghetti, Stephanie and Kristen treated him to dinner at The Old Spaghetti Factory. Housed in an old blacksmith shop built in 1898, the legendary Italian restaurant is decked out with relics of the past including antique gas lamps, a retired streetcar and a 100-year-old carousel. After dinner, the three took an Uber (another first for the 100-year-old!) to Scotiabank Arena to attend Paul’s first game.

Although the Raptors won, the true highlight of the evening occurred between quarters, when Paul received a special visit from the Raptors mascot. With cameras rolling, Paul got birthday shoutout in front of the whole arena from DJ 4Korners, the team announcer who pumps up the crowd at home games. The birthday boy was presented with a birthday cake, given a commemorative jersey printed with his name (he’s  #100, of course) and a certificate marking his first Raptors game, and was invited down to the court for a photo opp. Paul was absolutely thrilled to be recognized, grinning as he posed for photos and watched the moment captured on the giant video screen and shared by the Raptors on Twitter.

“We all had fun planning the surprise,” says Silk. “It was amazing to do something special and memorable for Paul.” Amica residences are known for making birthdays special. Meet one resident who wished to mark her birthday by doing EdgeWalk around the tip of the CN Tower and another residence that celebrated monthly birthdays with a stylish Roaring ’20s party.

“This was a bucket list item for Paul,” says Jason Post, Regional Director of Operations for Amica. “I saw him this morning as he was waiting to go into the dining room. He had his Raptors jersey on and he was still smiling from ear to ear. The other residents all thought it was great — it really had an impact on the entire residence.”